(This was adapted from the official Mickaboo profiles for my first two adoptees. I've left it in the present tense even though both have long since passed away.)

Hi. We're Buddy and Chance, and our new best friend says we can have this page to tell our stories and how we came to live with her. 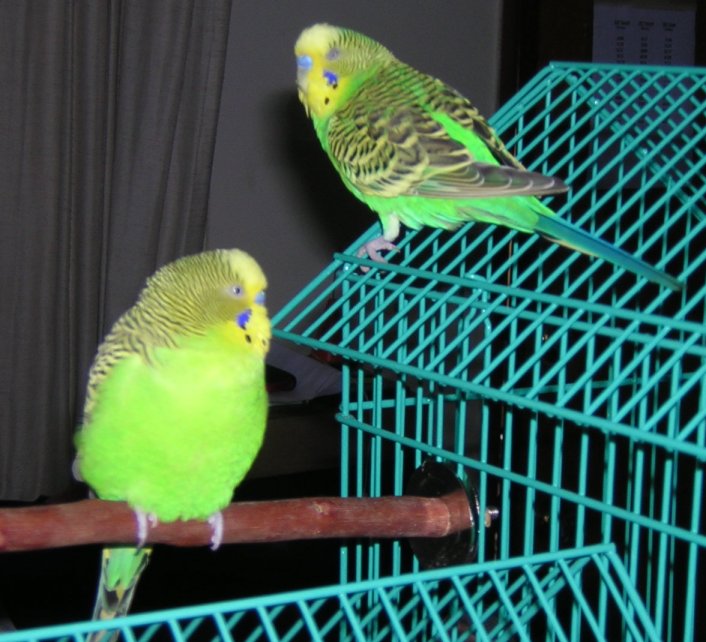 I want to go first! My name is Buddy, and I'm the one on the left. I lived almost my whole life in the same home with Monty, my English cousin. Then one morning, Monty didn't wake up, he just lay there on the bottom of our cage. It had been really exciting at our house because we were all packing to move. But after Monty went away, things became very confusing. My person, a very nice lady who loved budgies, was kind of sick and she was going to move us all far away, to live with her daughter. But then she said she couldn't do that because they have a bunch of cats. I have to say here that I get very nervous around cats, but I was ready to go anyway. But my person said she didn't want to risk it. So she called Mickaboo and I ended up in a Mickaboo foster home.

My new person saw me on the Mickaboo website and fell in love with me. They told me I was going to live with another budgie named Tiki, but I guess something happened and Tiki doesn't live here now. But before they took me to my new person, they brought me a new cagemate named Chance.

That's me, the one on the right! (My eyes are closed because our person kept flashing a light at us, and honestly, I was just plain tired of it.) I had a home with some nice people, but one day I thought I'd go for a little fly-around. I ended up in the wild jungle and then was in an animal shelter for a looooong time, with no other birds. But Mickaboo came and got me and took me to a nice home with lots of other budgies, and they told me they were going to find me a "forever home".

One day, they snatched me from my cage, stuck me in a tiny box, and took me away from my home (well, I thought it was my home, anyway) and friends and toys. I was soooo scared that my poop was runny.

Don't tell them that, Chance! Oh, let me finish telling it.

So one day, they put Chance in my cage and told me they were hoping we could go to the same forever home together, because the nice person who had seen me on the Mickaboo website wanted to adopt two budgies now. (I thought that meant there was going to be three of us, but that was before I found out Tiki wasn't going to live with us.) Anyway, I ran up to Chance and started beaking and chattering and telling him all about my friend Sweet Boy, who used to be my cagemate but just up and left without even saying goodbye. The nerve!

Anyway, Chance looks so much like me, I figured we were part of the same flock and had just gotten separated somehow. He's a darker shade of green and his stripes are darker and more vivid. I'm a little bigger than Chance and they say I am much more outgoing, whatever that means.

It didn't take me long to decide I liked Chance even better than Sweet Boy. I even shared my food bowl and my perch with him, which I never did before!

Then one day they put both of us in something called a travel cage and took us in the car for a ride. We thought we would be going back home after a while but the ride just kept going on and on and on ... but we figured that as long as they weren't separating us again, we'd go with the flow and see what happened.

After what seemed like an eternity (for a budgie even an hour seems like a really long time) they took us out of the car, only we didn't recognize anything from where home was. They brought us to something called an apartment, where a very nice person seemed very happy to see us and put us in a nice big cage with lots of perches and mirrors and bells and toys. She talked to us for hours and hours before bedtime (and we like the sound of her voice, because we can tell from it that she likes budgies a whole lot). In the morning she gave us fresh food and even something called broccoli, which we never knew the name of before but is very tasty!

As far as we can figure out, this is what a "forever home" is, because no one has tried to take us away from here since we arrived. Our new person lets us fly around the apartment, and we even figured out how to fly back to our cage without having to be caught and taken back there (aren't we smart little guys?). We're still kind of nervous about being held, but our new best friend apparently knows how to treat us gently -- we're just a couple of little birds, after all -- and this really is where we belong.

So now we're a couple of happy little guys.

POSTSCRIPT (June 21, 2010): Buddy developed an abdominal tumor which he managed to successfully conceal from me until it was too late to do anything for it. Although I was able to get him to the vet within 24 hours, he died on the way home from there. His spirit flies free.

Mickaboo found two sweet little green boy budgies, Mieli and Apollo, to be new pals/cagemates with Chance. They arrived on July 10, 2010; below is a picture of the three of them, taken the day after the two "new guys" arrived: 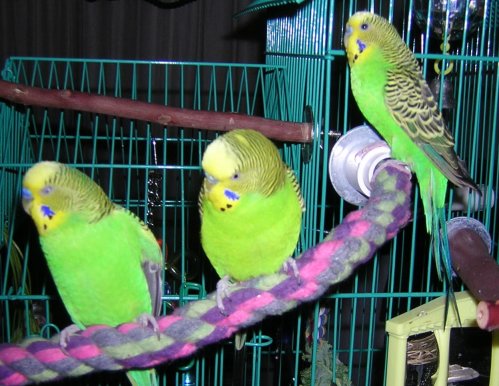 From left to right: Chance, Mieli and Apollo.

More pics of the trio here.